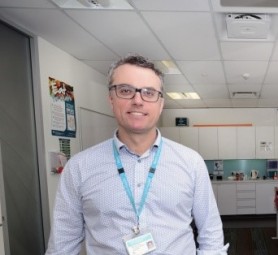 Michael Deen is an Occupational Therapist and the Team Leader of the Metro South Health Persistent Pain Management Service in the Division of Rehabilitation at the Princess Alexandra Hospital. He has worked in the field of persistent pain management for 18 years. He started his clinical career in community-based vocational rehabilitation and since then has worked in both hospital and community based persistent pain management services. In 2004, Michael was awarded the Cramond Fellowship in Occupational Therapy at the Royal Brisbane and Women’s Hospital where he completed a Master’s degree by research which investigated the relationship between pain cognitions, activity engagement and participation in life roles. Between 2007 and 2015 he served on the Board of the Australian Pain Society for eight years fulfilling the roles of Queensland Director and Secretary whilst also concurrently serving on a number of subcommittees including the Scientific Programming Committee and Local Organising Committee for the Queensland-based Annual Scientific Meetings. He was a
member of the Steering Committee for the Australian National Pain Summit which culminated in the development of the National Pain Strategy released in 2010. Michael has been actively involved in the development of public persistent pain management services in Queensland having represented the interests of allied health clinicians on a number of steering committees and working groups.